It has been a few months since we first publicly announced that we are working on the OH-58D Kiowa for DCS World.

For the past two years we have been working on the Bell OH-58D Kiowa Warrior. Back then we were not yet certain what flight simulator software we’d be building the OH-58D for but at some point we decided (again) on DCS world.
During the past 2 years we have been talking to a lot of individuals including people from Bell Textron, Eagle Dynamics and the US Army Cavalry community.

Bell Textron granted us a product specific license for the OH-58D Kiowa Warrior for commercial use, which means we were given permission to recreate the helicopter for game or entertainment purposes. Without this license a module for the DCS World environment would not be possible.

With the license also comes a responsibility. Anything related to the product will be subject to demanding quality control procedures. We recognize this as an opportunity and a benefit for the community, the simulation of the OH-58D Kiowa Warrior in DCS World and ourselves as a developing company. The license also grants us access to certain information otherwise not available to the public. Without it, it would simply be impossible to create a lifelike representation of the aircraft.

We are very thankful to our friends of the Kiowa community. These people are or were members of the US Cavalry and were and still are very helpful to us in many ways. They made sure we got in contact with the right people, got our facts straight and have been testing and providing feedback on the module from day one.

With the manufacturers license secured we got in contact with Eagle Dynamics to discuss with them the plans we had for our next module. This started a long period in which possible contracts were negotiated. Negotiations like these are complex, especially when it involves a third party, in this case Bell Textron. In the end all parties have to agree to the terms and conditions.

In October 2019, a day before the Cosford Flight Sim Show, we got the green light from Eagle Dynamics to announce the OH-58D Kiowa Warrior as a possible DCS World module. Even though the contract had not been finalized, at that point we were at a stage in negotiations where it was very plausible all parties involved would come to an agreement.

Today we can announce that all contracts have been signed and finalized. The OH-58D Kiowa Warrior will be released as a DCS World module. We can’t reveal a release date yet. We’ve set our sights on a release in 2020 though.

A few days ago, Twitch streamer ThePaveHawker, rather unexpectedly got to try an alpha build of the module. This turned in to a livestream that went on for 14 hours and 40 minutes. Even though the stream was unplanned and a rather impulsive decision, it was well received. It also gave us the opportunity to answer many questions the community asked us during the stream.
Following up on this, we plan to have a dedicated streamer show the OH-58D Kiowa Warrior in planned events that we will announce to the community in the near future.

We also plan on releasing videos on various systems and procedures to get acquainted with the OH-58D Warrior before release.

Since the flight model of the Gazelle module has been the most controversial part of our products, we pay very close attention to the OH-58D flight model to make sure we get it right this time. We made the flight model and the code behind it our main focus for the better half of the past two years. Only adding avionics and systems later on in the process. Former Kiowa Warrior pilots have been testing and providing feedback on the flight model from day one and continue to do so until they are completely satisfied. When that is the case, the project will be handed over to Bell Textron and their quality assurance team.

You will find most systems operational and accurately modelled in the OH-58D Kiowa Warrior module with some exceptions. Systems not included are either classified or have no use in DCS World at this time. We will go into more details on the avionics in the near future.

In terms of weapons we have already included the M3P machinegun, the Hydra rocket pod with 4 different warheads; 10lb, 17lb, smoke and illumination. In addition we have added the APKWS laser guided Hydra rocket equipped with a 10lb warhead. Of course the AGM-114 Hellfire will be included as well.

With the OH-58D Kiowa Warrior module you will be able to self lase for any AGM-114 Hellfire missiles you have loaded on your helicopter. You can also lase targets for other OH-58D’s or any other aircraft capable of dropping laser guided munitions in DCS World.

Last but not least we did add the ATAS system, which is the name for the stinger block 1 anti-air missile, that was fully functional and integrated into the Kiowa Warrior until its retirement in the US Army. Not many were ever fired, but the system is very potent and gives the Kiowa Warrior a sting capability against fast moving aircraft.

As has been stated before in a number of articles, we initially planned not to include multicrew capability for the OH-58D Kiowa Warrior module. At the time these articles were published, ED had not yet announced their plans of adding multicrew capability to the UH-1 Huey module. We are awaiting the results and hope the new multicrew code will be part of the software development kit. If this is the case we will re-evaluate multicrew capability.

As mentioned before, we will talk more about the avionics in different sitreps or news in the near future, as we will also show features that we have already mentioned in this article.

Overall we are happy that we have the opportunity to bring such an iconic helicopter, a workhorse of its kind, to DCS World and have her live on in our community. We also want to thank Eagle Dynamics, Nick Grey and Matthias Techmansky for all the support and the trust they have in our team and that we will be able to properly produce this magnificent helicopter, which was the first to ever have a glass cockpit worldwide.

Now the big question, when will the community hear next news or see new streams or videos about the Kiowa. We are currently planning to have a scheduled stream with a few people available. What, when and who, will be discussed and announced in a few days. So stay tuned.

For now, the whole team wishes all the best and everybody a merry Christmas 2019 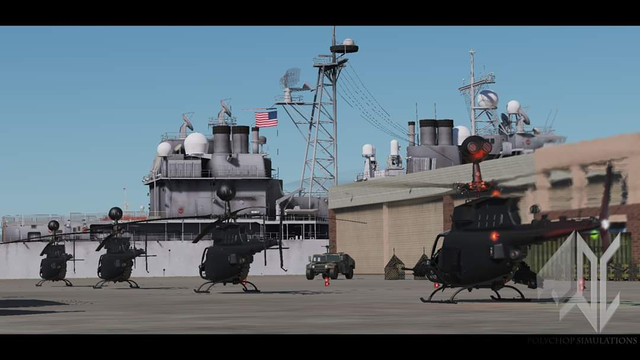 Since the flight model of the Gazelle module has been the most controversial part of our products, we pay very close attention to the OH-58D flight model to make sure we get it right this time.

Since the flight model of the Gazelle module has been the most controversial part of our products, we pay very close attention to the OH-58D flight model to make sure we get it right this time.