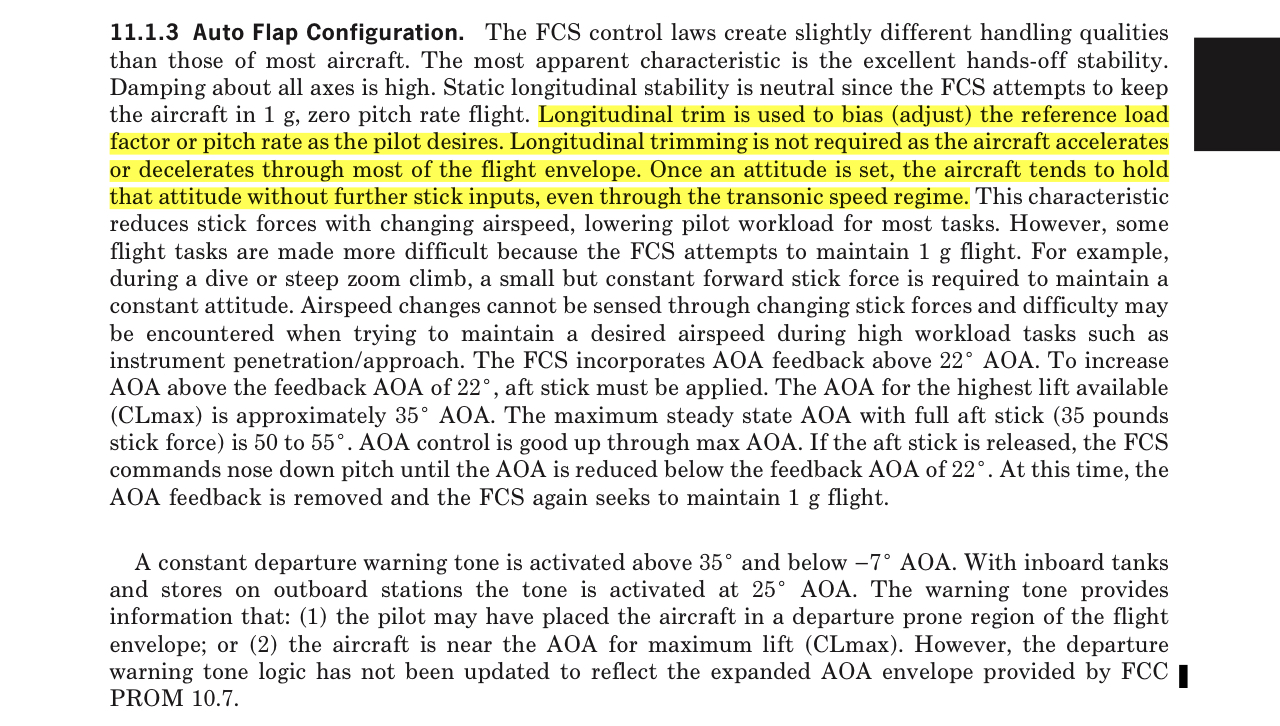 
2.8.2.2.5 Pitch and Roll Trim Switch. Normally, movement of the pitch and roll trim switch
electrically biases the flight control computers and the stick does not move. Little if any pitch trim is
required in the auto flap up mode due to the automatic trimming functions within the flight control
computers. In MECH, pitch trim moves the control stick fore and aft, changing the stick neutral point.
There is no mechanical lateral trim.

2.8.2.8 Control Augmentation System (CAS). The longitudinal control system uses air data
scheduled pitch rate, normal acceleration (NZ) and angle-of-attack (AOA) to compute stabilator
actuator commands. The aircraft response is compared to the pilot command and the stabilator
servoactuator is driven to reduce the difference to zero. Since, in the auto flaps up mode, any
uncommanded pitch rate or g is reduced to zero, the aircraft is constantly trimmed to steady state
hands-off 1 g flight and there is little or no occasion for manual trim.

11.1.3 Auto Flap Configuration. The FCS control laws create slightly different handling qualities
than those of most aircraft. The most apparent characteristic is the excellent hands-off stability.
Damping about all axes is high. Static longitudinal stability is neutral since the FCS attempts to keep
the aircraft in 1 g, zero pitch rate flight. Longitudinal trim is used to bias (adjust) the reference load
factor or pitch rate as the pilot desires. Longitudinal trimming is not required as the aircraft accelerates
or decelerates through most of the flight envelope. Once an attitude is set, the aircraft tends to hold
that attitude without further stick inputs, even through the transonic speed regime. This characteristic
reduces stick forces with changing airspeed, lowering pilot workload for most tasks. However, some
flight tasks are made more difficult because the FCS attempts to maintain 1 g flight. For example,
during a dive or steep zoom climb, a small but constant forward stick force is required to maintain a
constant attitude. Airspeed changes cannot be sensed through changing stick forces and difficulty may
be encountered when trying to maintain a desired airspeed during high workload tasks such as
instrument penetration/approach. The FCS incorporates AOA feedback above 22° AOA. To increase
AOA above the feedback AOA of 22°, aft stick must be applied. The AOA for the highest lift available
(CLmax) is approximately 35° AOA. The maximum steady state AOA with full aft stick (35 pounds
stick force) is 50 to 55°. AOA control is good up through max AOA. If the aft stick is released, the FCS
commands nose down pitch until the AOA is reduced below the feedback AOA of 22°. At this time, the
AOA feedback is removed and the FCS again seeks to maintain 1 g flight.